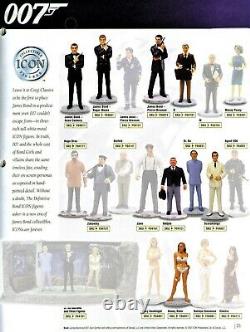 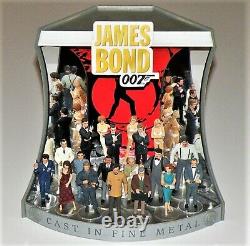 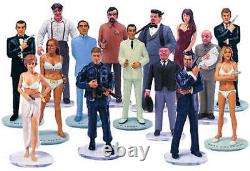 Description: Metal HAND painted figurines of characters presented in the James Bond Movie franchise. For detailed SELECTION LIST of 9 figurines please scroll down. Size: 3 range (varies depending on the heights of the actors who played the personage depicted in the figurine) Approximately 1/24 scale. Please keep in mind that a close up picture its like looking on an object through a magnifying glass. In reality figurines looks much more realistically and personages well recognizable. Corgi ICON James Bond Figurines. The James Bond ICON Collectibles are lifelike figures cast in fine metal. Their unique appeal lies in the accuracy of each figure. Facial expressions and characteristic poses have been recreated in a detail so exacting that the individual personality of each character is faithfully recreated. From the master sculptors who create the figures to the artists who paint them by hand, ICON Collectibles are truly a miniature work of art.

Leave it to Corgi Classics to be the first to place James Bond in a predicament even 007TM couldnt escape from in three-inch-tall white metal ICON figure. In truth, 007 and the whole cast of Bond Girls and villains share the same timeless fate, all at once exuding their on-screen personas as captured in had-painted detail. Without a doubt, The Definitive Bond ICON figures usher in a new era of James Bond collectibles. For information regarding AKA 1.

Editions and Spyguise Releases please scroll down to the bottom of the page. Listings with the Variations option dont have MAKE OFFER option. I will consider reasonable offers. The ICON Line by Corgi (white metal, hand painted figurines) was very popular, especially James Bond Collection, but it was in production only for a few years and was dropped in 1. Quarter of 2002, the official reason was a limited production ability of the factory.

Vast majority of these figurines enjoys price appreciation, it well sought after. M, Q and Miss Moneypenny figures were released in the 1st quarter of 2002. On the US market items were delivered after it already. Was known about that the ICON line retirement. The production numbers are unknown but its in times lower compare to other figures from the Bond collection, with exceptions to limited edition James Bond Connery and Moore figures.

1 F04011 James Bond Agent 007. Sir Sean Connery (born 25 August 1930) is a Scottish actor (he won an Academy Award, three Golden Globes and other awards), and producer. No (1962), From Russia With Love (1963), Goldfinger (1964), Thunderball (1965) and You Only Live Twice (1965) then appeared in the seventh Bond movie Diamonds Are Forever (1971) and the non-Eon Never Say Never Again (1983), which was based on the James Bond novel Thunderball. Though five other actors portrait James Bond character, arguably, Sean Connery is the most famous James Bond yet.

6 F04191 Q played by Desmond Llewelyn (RIP) - was a Welsh actor, best known for his role as Q in 17 of the James Bond films between 1963 From Russia With Love and 1999 The World is Not Enough , with the exception of. In 1973, in which the character Q did not appear. In all, Llewelyn appeared in 17 Bond films, more than any other actor, and worked with was the only actor in the original Bond series to have worked alongside five of the actors who played James Bond. 7 F04021 Honey Ryder Dr. No, played by Ursula Andress born 19 March 1936 is a Swiss film and television actress, former model and sex symbol, who has appeared in American, British and Italian films.

She is best known for her breakthrough role as. No p layed by Joseph Wiseman (RIP) (May 15, 1918 October 19, 2009) was a Canadian American theater and film actor, well known for starring as the villain Julius No in in the first James Bond film Dr. He was also known for his role as Manny Weisbord on the TV series Crime Story, and his career on Broadway. Item is new, old stock, never displayed, NO ORIGINAL PACKAGING. 9 F04151 Oddjob played by Harold Sakata (RIP) (often written as "Odd Job") is a fictional character in the espionage novels and films featuring James Bond..

He is a henchman to the villain Auric Goldfinger in the 1959 James Bond novel Goldfinger and its 1964 film adaptation In the film, he was played by the Japanese-American actor and professional wrestler Harold Sakata. 10 F04171 Sir Hugo Drax - played by Michael Lonsdale is a British-French. Who has appeared in over 180 films and television shows. He is best known in the English-speaking world for his roles as the villain Hugo Drax in the 1979 James Bond film Moonraker, the detective Claude Lebel in The Day of the Jackal, and M.

Dupont d'Ivry in The Remains of the Day. 11 F04161 Jaws played by Richard Kiel (RIP) was an American actor and voice artist. 12 F04051 Scaramanga - is the main antagonist in the James Bond novel and its film version of The Main with the Golden Gun.

Francisco Scaramanga's signature weapon is a golden gun. In the novel, the character is nicknamed "Pistols" Scaramanga and is also called "Paco" (a Spanish diminutive of Francisco). In the film, the character was played by Sir Christopher Frank Carandini Lee CBE, CstJ (RIP) in 1974 film The Man with the the Golden Gun, (the real-life step-cousin of James Bond creator Ian Fleming), was an English actor, singer, and author.

With a career spanning nearly seven decades, Lee was well known for portraying villains and became best known for his role as Count Dracula in a sequence of Hammer Horror films a typecasting he always lamented. 13 F04131 Zukovsky played by Robbie Coltrane (Valentin Dmitrovich is an ex-KGB agent-turned-Russian mafia head) Anthony Robert McMillan OBE (born 30 March 1950), known professionally as Robbie Coltrane. Is a Scottish actor and author. He is known for his roles as Rubeus Hagrid in the Harry Potter, his role in James bond films Golden Eye and The World is Not Enough and as Dr. Eddie "Fitz" Fitzgerald in the British TV series Cracker during the 1990s. I cant be held liable for loss or damage while in transit.

Don't hesitate to ask questions. PLEASE CHECK MY OTHER ITEMS. 1st Edition it appears as misleading description ; and doesnt comply with the definition. Early production items featured different packaging (personally I prefer that one); in which the bottom part could be used as a pedestal for displaying a figurine.. There no difference in appearance of figurines; all items still care same catalog and SKU numbers, and there werent a brake period in the production cycle.

Thus it shouldn't be described as 1. Edition but rather something like early packaging style. SPY GUISE were issued for a third party; NOT OFFICIAL Corgi catalog items; It a same product but packed in a box with an attractive artwork which, personality I like it very much.

The item "James Bond CORGI ICON White metal Hand Painted 3 1/24 12 figurines figure" is in sale since Saturday, May 1, 2021. This item is in the category "Entertainment Memorabilia\Movie Memorabilia\Merchandise & Promotional\Figures & Dolls". The seller is "dybovayagolova" and is located in Fort Lee, New Jersey.

This item can be shipped to United States.