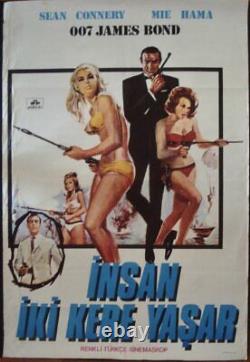 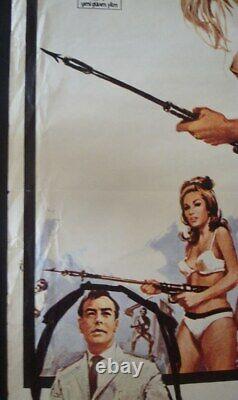 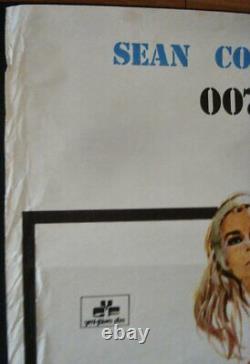 YOU ONLY LIVE TWICE (1967). Very rare Turkish movie poster printed for the first release in 1969 of the fifth JAMES BOND movie directed by Lewis GILBERT starring Sean CONNERY, Donald PLEASENCE, Tetsuro TANBA, Akiko WAKAYABASHI and Mie HAMA. The image used by the Turkish designers has mainly been "lifted" i. Copied from the Deadlier Than The Male poster.

Format : 27x39 inches (69x99 cm). Poster has been folded but has since laid flat. Wrinkling on edges which has receded since received as it's been stored with rolled posters. Will be sent rolled under a plastic sleeve and inserted in a sturdy tube. For larger quantities, a separate invoice will be sent.

This is one of the many movie and music posters which can be found at ILLUSTRACTION GALLERY - ART THAT POPS! A brand new online poster gallery devoted to the celebration of the poster artists behind the art of the movie, music and comic book.

ILLUSTRACTION GALLERY - Art That Pops! This item is in the category "Entertainment Memorabilia\Movie Memorabilia\Posters\Originals-International\1960-69". The seller is "illustractiongallery" and is located in this country: US. This item can be shipped worldwide.