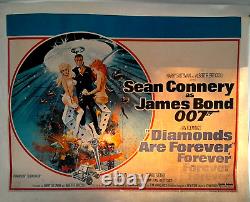 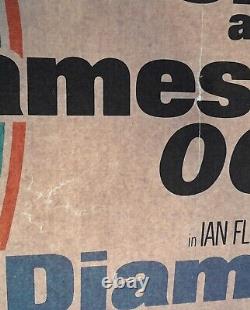 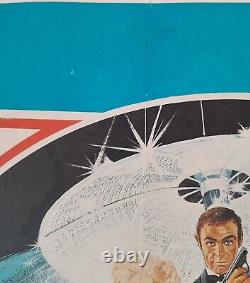 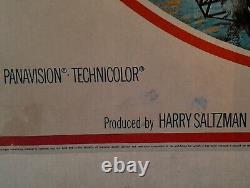 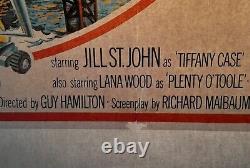 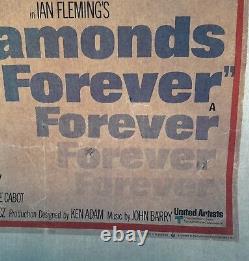 Original 1971 BRITISH QUAD (40 inches by 30 inches) poster used in movie theaters for marketing in the UNITED KINGDOM. This rare vintage movie paper is in GOOD+ condition.

Natural age appropriate appearance, restored with natural edge wear and fold wear and tiny holes. The poster had creases, pinholes, and some smudges and scuffs. Exciting, colorful and classic James Bond 007 Spy imagery. A diamond smuggling investigation leads James Bond 007 to Las Vegas, where he uncovers an evil plot involving a rich business tycoon. James Bond's mission is to find out who has been smuggling diamonds, which are not re-appearing.

He adopts another identity in the form of Peter Franks. He joins up with Tiffany Case, and acts as if he is smuggling the diamonds, but everyone is hungry for these diamonds. He also has to avoid Mr. Kidd, the dangerous couple who do not leave anyone in their way. Ernst Stavro Blofeld isn't out of the question.

Also in cast is JILL ST JOHN, CHARLES GRAY, LANA WOOD, JIMMY DEAN, BRUCE GLOVER, LOIS MAXWELL, BRUCE CABOT, DESMOND LLEWELYN, BERNARD LEE. BEHIND THE SCENES TRIVIA : George Lazenby was asked to make a second Bond movie but declined, due to a lengthy and restrictive potential contract. Burt Reynolds was the original choice to replace him but was unavailable. John Gavin was signed to play Bond in this movie, and had recently played the French Spy OSS 117 in the Eurospy flick OSS 117 Murder for Sale (1968).

Adam West turned down the role because he felt that James Bond should be a British actor. Michael Gambon turned down the role because he was "in terrible shape" and had tits like a woman. At the last minute, Sir Sean Connery agreed to return as Bond for the sixth time in a two-picture deal, at an astronomical salary for the time. Broccoli insisted that Gavin be paid the full salary, for which his contract called. John and Lana Wood have been involved in a decades-long feud that began during the filming of this movie, throughout the spring of 1971, when both women were dating Sean Connery at the same time.

In February 1982, less than three months after the mysterious drowning of Lana's sister Natalie Wood, St. John started a romance with Robert Wagner, Lana's brother-in-law, and eventually married him.

At a Bond girl photo shoot reunion in September 1999 for Vanity Fair magazine, an altercation occurred between St. John and Wood when photographer Annie Leibovitz asked for a picture of them together.

John was so adamantly opposed to the idea that it reduced Wood to tears. Family publicist Alan Nierob, however, said it was he who vetoed the photo because Mr. Wagner would prefer his present wife not be shot with his former sister-in-law. In February 2016, Wood crashed a benefit honoring St.

John in Palm Springs and publicly confronted Wagner in front of cameramen over Natalie's death. The case has been reopened since November 2011, initiated by yacht skipper Dennis Davern's admission that he originally lied to police.

She reported the threat to authorities. My first instinct was it might be Jill, trying to scare me off, and protect him.

But I'd recognize Jill's voice. It wasn't her, Wood told RadarOnline in July 2016.

Wagner was officially named a Person of Interest in Natalie Wood's death in February 2018. John reportedly slammed the door in LACSD homicide detectives Kevin Lowe and Ralph Hernandez's faces when they tried to question Wagner at the house she shares with him in Colorado.

On July 25, 2018, Lana Wood appeared on Megyn Kelly Today (2017) and when asked by Kelly if she thinks Wagner "murdered" her sister, Lana said, Yes. This item is in the category "Entertainment Memorabilia\Movie Memorabilia\Posters\Originals-International\1970-79". The seller is "hardtofindrare" and is located in this country: US. This item can be shipped to North, South, or Latin America, all countries in Europe, Australia, Indonesia, Taiwan, Hong Kong, New Zealand, Singapore, Malaysia, Brunei Darussalam, Cambodia, Macau.