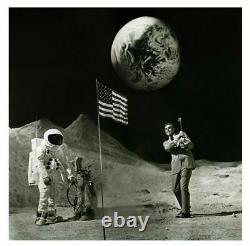 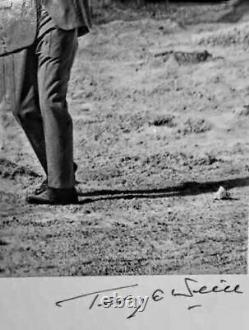 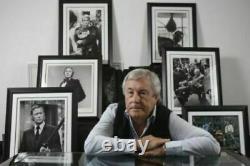 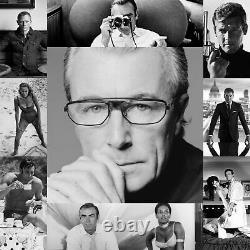 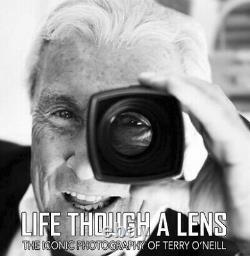 Sean Connery on the Moon, 1971 Silver Gelatin Print Signed and numbered edition of 50 with certificate of authenticity Re-creating astronaut Alan Shepards famed golfing on the moon picture, Connery as James Bond plays golf on a deserted film set in Pinewood Studios in London during the filming of Diamonds Are Forever, 1971 Terry O'Neill (born 1938; London, UK) is an English photographer. He gained renown documenting the fashions, styles, and celebrities of the 1960s. O'Neill's photographs display his knack for capturing his subjects candidly or in unconventional settings. His work has also been featured in numerous exhibitions. He was awarded The Royal Photographic Society's Centenary medal'in recognition of a sustained, significant contribution to the art of photography' in 2011.

This is the HAND SIGNED LIFETIME EDITION OF 50. The Estate signed posthumous print is also available on request. All reasonable offers will be considered. Photograph life time edition of 50.

Hand signed in ink at the bottom right, numbered out of 50 at bottom left. ONeill began his career at the birth of the 1960s.

While other photographers concentrated on earthquakes, wars and politics, ONeill realised that youth culture was a breaking news story on a global scale and began chronicling the emerging faces of film, fashion and music who would go on to define the Swinging Sixties. By 1965 he was being commissioned by the biggest magazines and newspapers in the world. No other photographer has embraced the span of fame, capturing the icons of our age from Winston Churchill. As well as every James Bond. When they were still struggling young bands in 1963, pioneered backstage reportage photography with David Bowie.

And his images have adorned historic rock albums, movie posters and international magazine covers. Terry O'Neill passed away in November 2019. Terry ONeill CBE was one of the worlds most collected photographers with work hanging in national art galleries and private collections worldwide.

From presidents to pop stars he photographed the frontline of fame for over six decades. Born: August 25, 1930 Edinburgh, Scotland. From humble beginnings as a school dropout, Sean Connery became a major movie star at the age of thirty-two, when he was cast as the sophisticated secret agent James Bond.

Connery went on to distinguish himself in a number of major motion pictures, including his Oscar-winning performance in The Untouchables. With more than sixty movies to his credit, Connery has become one of the world's most prominent movie stars. Thomas Sean Connery, born on August 25, 1930, began his life in the humblest of surroundings. He was the eldest of two sons born in Edinburgh, Scotland, to Joseph and Euphamia Connery. His family was so poor that young Thomas had to sleep in the bottom drawer of his parents' dresser.

He started working to help support the family at age nine, delivering milk and assisting a butcher. He left school at age thirteen. Connery joined the British Royal Navy in 1946, but received a medical discharge three years later. In 1953 Connery won third place in the Mr. Universe competition (a contest measuring strength).

He also heard about auditions for the musical South Pacific. He decided he wanted to try out, took a course in dancing and singing, and was cast for a role in the chorus. At the time Connery was undecided between becoming an actor and becoming a professional soccer player. He eventually decided to take the advice of actor Robert Henderson, who encouraged him to pursue acting. After South Pacific, Connery got his first television role in Requiem for a Heavyweight. He received critical acclaim for this role, and went on to make a series of B (inexpensively made) movies from 1955 to 1962. During this time Connery met Terence Young, who was to be the director of the James Bond films. Connery was still doing B movies when he was asked to interview for Dr. No, the first James Bond film. Producer Harry Saltzman felt that he had the masculinity the part required because he punctuated his words with physical movement. Connery was signed without a screen test (a short film scene to audition actors for a movie role). No was an instant success, propelling the little-known Connery into fame virtually overnight. The serious-minded and very private Connery did not like this sudden attention. In 1962 Connery married actress Diane Cilento. The couple divorced in 1974 and their only son, Jason, is now a movie actor. Connery married Micheline Roquebrune in 1975. Between 1962 and 1967 Connery made five James Bond movies Dr. No, From Russia with Love, Goldfinger, Thunderball, and You Only Live Twice. He became tired of the constant publicity and invasion of privacy that came with being a movie star. He also argued with Albert Broccoli, the producer of the Bond movies.

Connery wanted to slow the pace of the series and complete a feature every eighteen months instead of each year. But the nation was Bond-crazy and the films were a gold mine. After completing the film, Connery said "never again" to Bond roles and donated all of his salary to the Scottish International Education Trust, an organization he had founded to assist young Scots in obtaining an education. After the Bond films Connery focused on movie roles he found interesting. He would also do films if he felt his help was needed.

With a few exceptions, however, most of the films Connery did in the decade following Diamonds Are Forever were not noteworthy. In the early 1980s Connery was asked to reprise the James Bond role he had made famous, starring in Never Say Never Again. Connery again drew rave reviews as an aging Bond trying to get back in shape for a daring mission. After Never Say Never Again Connery began acting in more films. He went on to win an Academy Award in 1988 for his supporting role of Malone in The Untouchables.

This item is in the category "Collectibles\Photographic Images\Contemporary (1940-Now)\Other Contemporary Photographs". The seller is "anjamil0" and is located in Beverly Hills, California. This item can be shipped to United States.